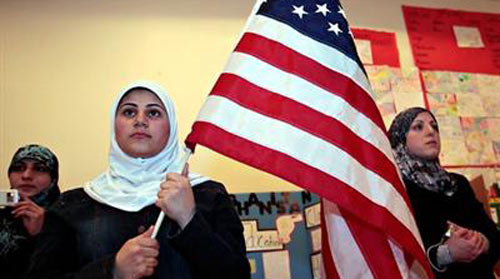 WASHINGTON, D.C. — The early days of Donald Trump’s presidency have been an anxious time for many Muslim Americans, according to a new Pew Research Center survey. Overall, Muslims in the U.S. perceive a lot of discrimination against their religious group, are leery of President Donald Trump and think their fellow citizens do not see Islam as part of mainstream American society.

At the same time, however, Muslim Americans express a persistent streak of optimism and positive feelings. Overwhelmingly, they say they are proud to be Americans, believe that hard work generally brings success in this country and are satisfied with the way things are going in their own lives – even if they are not satisfied with the direction of the country as a whole.

Indeed, nearly two-thirds of Muslim Americans say they are dissatisfied with the way things are going in the U.S. today. And about three-quarters say President Trump is unfriendly toward Muslims in America. On both of these counts, Muslim opinion has undergone a stark reversal since 2011, when Barack Obama was president, at which point most Muslims thought the country was headed in the right direction and viewed the president as friendly toward them.

In addition, half of Muslim Americans say it has become harder to be Muslim in the U.S. in recent years. And 48 percent say they have experienced at least one incident of discrimination in the past 12 months.

But alongside these reports of discrimination, a similar – and growing – share (49 percent) of Muslim Americans say someone has expressed support for them because of their religion in the past year. And 55 percent think Americans in general are friendly toward U.S. Muslims, compared with just 14 percent who say they are unfriendly.

Despite the concerns and perceived challenges they face, roughly nine-in-ten Muslims say they are both proud to be American and proud to be Muslim. Fully eight-in-ten say they are satisfied with the way things are going in their lives. And a large majority of U.S. Muslims continue to profess faith in the American dream, with 70 percent saying that most people who want to get ahead can make it in America if they are willing to work hard.

These are among the key findings of Pew Research Center’s new survey of U.S. Muslims, conducted Jan. 23 to May 2, 2017, on landlines and cellphones, among a representative sample of 1,001 Muslim adults living in the United States. This is the third time Pew Research Center has conducted a comprehensive survey of U.S. Muslims. The Center’s initial survey of Muslim Americans was conducted in 2007; the second survey took place in 2011.

• The Muslim population in the U.S. is both growing and very diverse, made up largely of immigrants and the children of immigrants from all across the world. Roughly six-in-ten U.S. Muslims (58 percent) were born outside the U.S., with origins in at least 75 countries. Pew Research Center estimates that there are 3.35 million Muslims of all ages living in the U.S. – up from about 2.75 million in 2011 and 2.35 million in 2007. This means Muslims currently make up about 1 percent of the U.S. population.

• Muslims also are quite varied in their religious allegiances and observances. Slightly more than half of U.S. Muslims are Sunnis (55 percent), but significant minorities identify as Shiite (16 percent) or as “just Muslim” (14 percent). Most Muslims say religion is very important in their lives (65 percent), and about four-in-ten (42 percent) say they pray five times a day.

• Compared with the U.S. public as a whole, Muslims are more likely to say targeting and killing civilians for political, social or religious reasons is never justifiable (76 percent vs. 59 percent). Roughly equal shares of Muslims (5 percent) and of Americans as a whole (3 percent) say such tactics are often justified (the difference between these numbers is not statistically significant).

• About three-quarters of Muslim Americans (74 percent) say President Trump is unfriendly toward their group, while two-thirds (65 percent) say they disapprove of the way Trump is handling his job as president. U.S. Muslim opinion on the sitting president has turned dramatically since 2011, when Muslims expressed much more positive views of Barack Obama. In 2007, near the end of his second term, George W. Bush’s approval ratings from U.S. Muslims were about as low as Trump’s today.

The survey finds a consistent gender gap on several questions about what it is like to be a Muslim in America, showing that Muslim women have a higher level of concern than Muslim men about the place of Muslims in U.S. society. For example, more Muslim women than men say there is a lot of discrimination against Muslims in the U.S. today, that they have personally experienced discrimination, and that it has become more difficult to be Muslim in the U.S. in recent years.

Americans continue to express mixed views of both Muslims and Islam. But on some measures, opinions about Muslims and Islam have become more positive in recent years. For example, there has been a decline in the number of Americans saying that Islam is more likely than other religions to encourage violence among its followers. In addition, a large and growing majority of the public says that Muslims in the United States face a lot of discrimination, and roughly half say media coverage of Muslims is unfair. Still, overall opinion on many questions about Muslims remains divided – and deeply fractured along partisan lines.

The findings are for immediate release and can be found here.

Pew Research Center is a nonpartisan fact tank that informs the public about the issues, attitudes and trends shaping America and the world. It does not take policy positions. The Center is a subsidiary of The Pew Charitable Trusts, its primary funder. Subscribe to our daily and weekly email newsletters or follow us on our Fact Tank blog.