Practical and emotion-free proposals to immigration issues are hard to come by these days.

But National Review and The Atlantic writer Reihan Salam has taken up the challenge. In his new book, the son of Bangladeshi immigrants suggests a compromise: an amnesty for long-time undocumented immigrants coupled with a merit-based system that would benefit high-skilled immigrants.

To strike such a deal, progressives and conservatives would have to make hard concessions. The first headache? Selling the idea of an amnesty to conservative Republicans.

2nd Annual Africa Meets America, a SeemssAfrica fashion show is a celebration of the African culture in America. Its mission is bringing together creative minds through fashion, music, food and dance.

A U.S. appeals court in California ruled on Thursday that President Donald Trump’s administration must continue a program begun under former President Barack Obama that protects hundreds of thousands of immigrants who were brought into the country illegally as children.

The decision by the San Francisco-based 9th U.S. Circuit Court of Appeals preserves the Deferred Action for Childhood Arrivals (DACA) program introduced in 2012 that has shielded from deportation a group of immigrants dubbed “Dreamers” and has given them work permits, though not a path to citizenship.

While the pundits digest the lessons to be learned from the 2018 midterm elections, one takeaway is immediately clear: many Americans want Congress to resume its critical role of checks and balances on the Trump administration and its overzealous immigration agenda.

Democrats’ control of the House of Representatives offers significant opportunity for the 116th Congress to hold the administration accountable for altering the immigration landscape.

“Who’s organizing the massive caravan on track to hit the US Border, just in time for the Election?”

That was just one headline last week on the website of the Christian Broadcasting Network, the Pat Robertson-founded evangelical media powerhouse that has become, in recent years, a de facto mouthpiece for the Trump administration.

President Trump wants to stop the U.S. from automatically granting citizenship to undocumented immigrants’ babies born in the U.S., a policy that — if approved — could hinder those children’s future economic success, critics say. 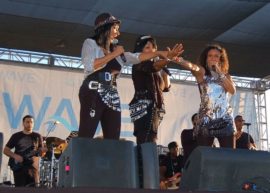 Los Angeles- Bakewell Media has brought it on once again. I’m speaking of the 13th Annual Taste of Soul. This huuuuge festival, the largest street festival in Los Angeles, and perhaps, in the nation for that matter, was held on Saturday, October 20th.
The Taste of Soul is a family-friendly event, as was held on “The Shaw” as Crenshaw is affectionately known as, between Stocker Boulevard to the South, and Rodeo Road on the North.
Bakewell Media loaded up all the bases with some heavy hitter, whose performances are known for knocking it out the park.

The Trump Administration is seeking to dramatically limit the ability of working-class immigrants to enter the U.S. and hamper their ability to remain, by making it easier to bar immigrants from the U.S. if they are likely to need help. The proposed “public charge” change could prohibit immigrants from obtaining permanent residency or from entering the country if they make less than $73,550 for a family of five. 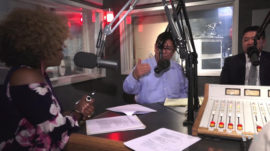 LOS ANGELES —For many immigrants, U.S. midterm elections traditionally draw minimal interest. But this election cycle, the reaction is different as a Democratic victory for control of the House or Senate or both would have huge repercussions for immigrant communities.