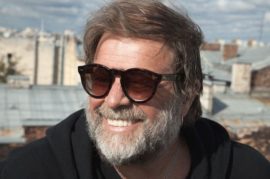 Described as the greatest living Russian poet and singer, cult music hero Boris Grebenshikov or “BG” will make his return to North America this December for a multi-city tour, in celebration of the 45th anniversary of his iconic band Aquarium that begins in Los Angeles at the Avalon on December 3.
Grebenshikov has been popular with Western audiences since 1986, when Aquarium was featured on “Red Wave,” the first compilation of rock music from St. Petersburg, Russia ever released by a US record label.