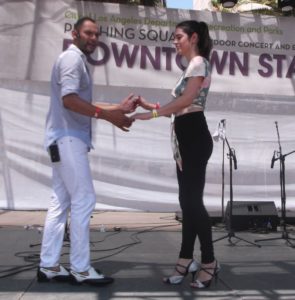 The 2nd Annual Latin Salsa Festival was held once again at Pershing Square, with a Tropical heatwave encompassing the park. The event producers kept expressing the importance of staying hydrated, they even offered free cups of ice water as the temperature kept increasing.
The Latin Salsa Festival was fun, cultural event that engaged the entire family. The festival featured tons of delicious salsa to sample in the Salsa Tasting Tent, along with local vendors offering up tasty selections throughout the festival grounds. Beer and Margarita bar, Live music, dancing, kids zone made this is a perfect place to spend a summer afternoon.
The furnace was burning full blast, musically speaking, when I arrived on the scene. The festival consisted of a stellar line-up of top-notched salsa bands fanning the flames of Latin rhythms. DJ Charlie Antillon returned once again for duel duties. He was at the controls of the ones and twos laying down some hot salsa tunes. He served as Master of Ceremonies.
The Arsenio Rodriguez Project honoring the legacy of prolific composer and arranger who wrote and recorded nearly a thousand songs, many of which are classic salsa hits today. The band performed two high octane sets that featured the tunes “Dile a Catalina,” “Suavecito,” and “Fuego en el 23,” to name a few.
Cristian Oviedo, 11 time salsa dance champion led the crowd in a quick session/class of salsa dances. You can call this a lecture and lab for the serious scholars in the crowd.
Gabriel Y La Verdad is a new exciting salsa band that just burst onto the local salsa scene. The band is made up of some of many talented Los Angeles based musicians. The crowded dance floor was proof that this band has found a place in the thriving salsa scene in Greater Los Angeles.
DJ Charlie extended invites for everyone to join him for the after party at a club in Hollywood on Saturday night, and encourage the crowd to return on Sunday for another fun filled day of music. 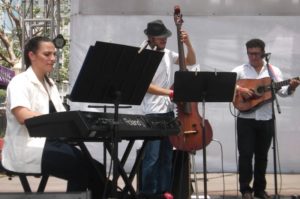 Fabian Otero, West Coast Salsa Orchestra returned once again to the delight of the community of Salseros in the house. This is an electrifying ensemble who delivered the goods to close out day one of the Latin Salsa Festival.
All of this salsa dancing caused one to either work up an appetite or it was used to burn off some calories. The smorgasbord of food vendors were quite busy. Food vendors consisted of Gourmet Sausages serving up Bratwurst, spicy Polish sausages, Italian sausages and Hot links. The Perfect Blend served up sweet corn bread and the ever so popular Cheese Mozzarella. Tortillas de Lola-cheese quesadillas, chicken or asada, vegan burritos and Raspados (snow cones). Fiera Salsa Hot Sauce booth served up tacos and quesadillas. Aurora’s Tacos served tacos, cheese nachos. The Choriman booth, 4th Generation Hand Crafted Artisan Chorizo, served up Chicken Chorizo and Tacos. Kim Yum Yum Choices-tamales and empanadas. Slangin Corea- crowd favorite Korean BBQ.
Are we getting hungry yet? There is more. A huge array of salsas were available to sample including Southbay Hot Sauces with names representing various beach cities. Salacious Dry Salsa, yes, I said dry salsa (mild or hot chile), Suzy’s Salsa’s, Frida’s Mexican Cuisine, El Pato-Walker Foods Inc., Cafe 50’s, Nam Prik Chile Sauce, Valentina Sauce, Inca Pica Hot Sauce, Don Antonio’s, Handsome Devi-extremely hot salsas and Nan’s Chile Sauces. Some like it hot!
Needless to say, one needs a beverage or two to tame the various degrees of sauces. The adult beverage options consisted of beer, wine, margaritas, Micheladas and Sangria.
The more family oriented beverages were Dulce Europa Shave Ice, Snow Biz Snow Cones, Aqua Frescas-Horchatas, Free samples from Naked Juices, Hawaiian Honeycones. Making a splash unto the outdoor concerts/festival circuit were Delicious Beverages- Sweet Tea and Lemonade. They were a huge draw for the crowd, giving out free samples of their Standard flavors as well as their Signature flavors which I couldn’t get enough of on this hot afternoon.
A prior engagement kept me from returning for day two of the Latin Salsa Festival. Ricardo Lemvo Y Makina Loca, Orchestra Son Cache, Box of Beats (sensational one man band), and a much anticipated set by Costazul were on the line up.
The 2nd Annual Latin Salsa Festival offered the ideal ambiance for the entire family to spice up their weekend at Pershing Square with the beautiful downtown skyline framing the event. 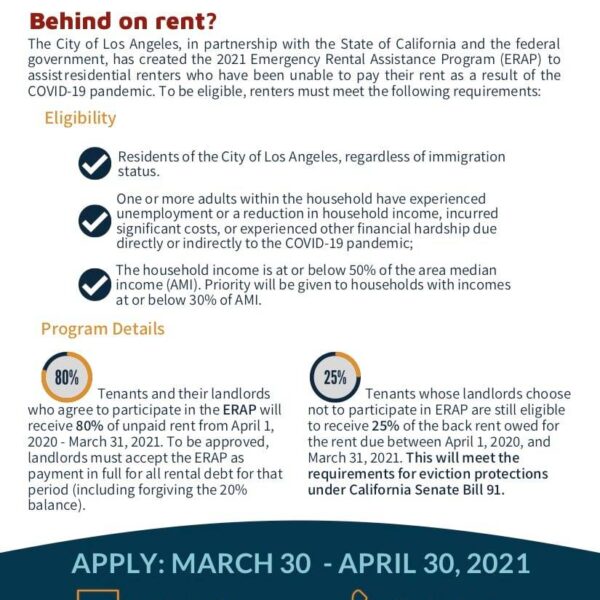 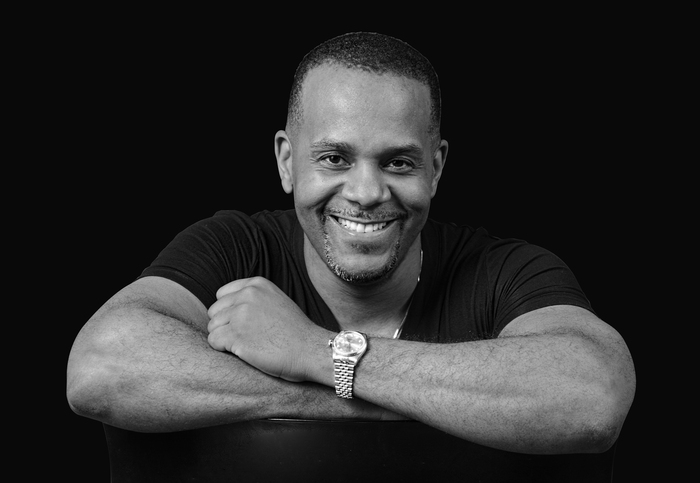 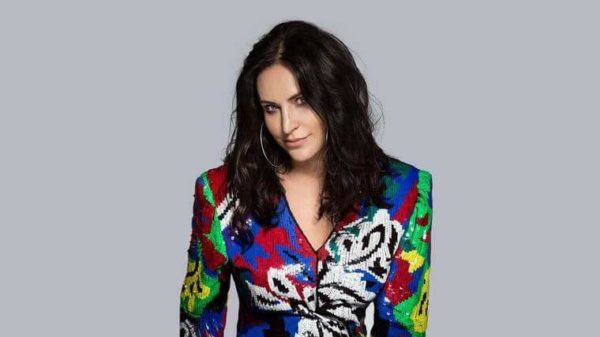 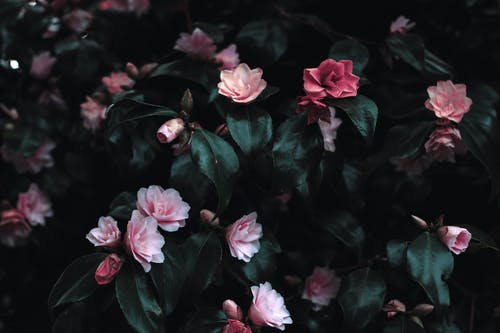