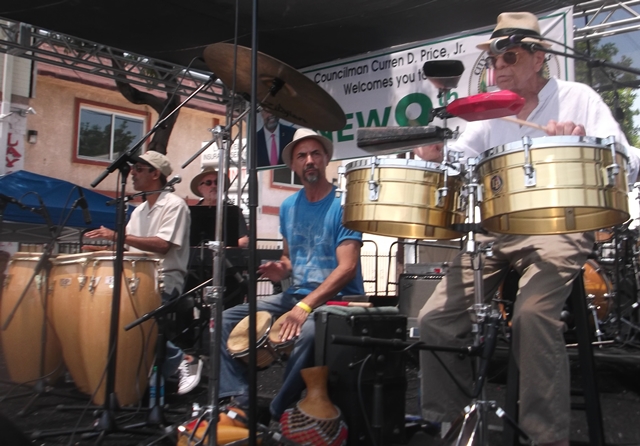 This amazing family friendly festival was held along Central Avenue between Martin Luther King Jr. Blvd and Vernon Avenue. For two decades and counting, the Central Avenue Jazz Festival has helped to celebrate the musical history and culture of South Los Angeles, the west coast birthplace of Jazz music, America’s #1 art form. A huge crowd strolled up and down Central Avenue enjoying all that the festival had to offer.

Michael Session Sextet continued in a straight-ahead mode. They opened their crowd pleasing set with “Milestones” and continued with “Donde Esta Axe” by Nate Morgan, which translate to Where is your ax (musical instrument). Vocalist, flautist and harp player Maia joined the band to sing “Pretty Eyes” by Horace Silver and additional tunes.

Saxophonist Aaron Shaw was tearing it up on the Main Stage with a group of young jazz lions. Katia Moraes & Brazilian Hearts took the crowd and me on a musical journey into the marvelous sounds from various regions throughout Brazil.

Saxophonist Christopher Astoquillca was quite busy this day performing at multiple Peruvian Independence Day Celebrations. Christopher was making a return engagement leading his own band. He brought in a group of young cats, Matthew Sampson-trumpet, Drew Dennet-bass, Adam Hurst-keyboards and Makela Session on drums and then they got into something on the tunes “Blue Bossa,” “Cherokee,” “Youngest Scholar” an original composition, followed by “Impressions” by John Coltrane while also honoring the legacy of Rahsaan Roland Kirk by playing two saxophones at the same time. They moved on with “Stomping at the Savoy,” and concluded their set with “A Night in Tunisia.”

Another highlight of day one featured new school crooner T. C. Carson, yes, that’s right, Kyle Barker. T. C. Carson is a singer and stage and voice and television actor best known for portraying Kyle Barker on the FOX sitcom Living Single featuring Queen Latifah, Erica Alexander, Kim Fields and John Henton.  You probably recognized his distinct baritone voice from Star Wars: The Clone Wars as voice double for Samuel L. Jackson. T. C. Carson was superbly aided by Julius Speed-keys, Dale Adkins-bass and Larry Newson-drums. They thoroughly entertained the crowd with some jazz standards and classic R&B soul tunes on “My Favorite Thing,” “ I Saw the Midnight Sun,” “Taste” (Of Your Love), “I Want to Be Your Lover” in a tribute to Prince, “Inner City Blues” a timely tune, as it relates to the current Presidential elections and issue facing urban communities throughout America.

My day ended with a partial set from the Banda Brothers on Stage 2 and a few songs from The Los Angeles Jazz Orchestra Unlimited a group of jazz heavy hitters with Kenny Burrell-Artistic Director, Dr. Bobby Rodriguez and Charley Harrison-Conductors.

Legendary jazz Singer Ernie Andrews, aka “Mr. Central Avenue is an entertainer’s entertainer. He held court on Sunday on the Main Stage. Every tune was followed by thunderous applause, as jazz aficionados are always enthralled during a solid performance by this legend of the early days of Central Avenue.

People took a break a from the music to browse the popular Youth Pavilion, Health & Wellness Pavilion, Arts Pavilion and the Business Development & Employment Resources Pavilion.

A good time was had by all in attendance, and they walked away with some swag, and a ton of helpful information.