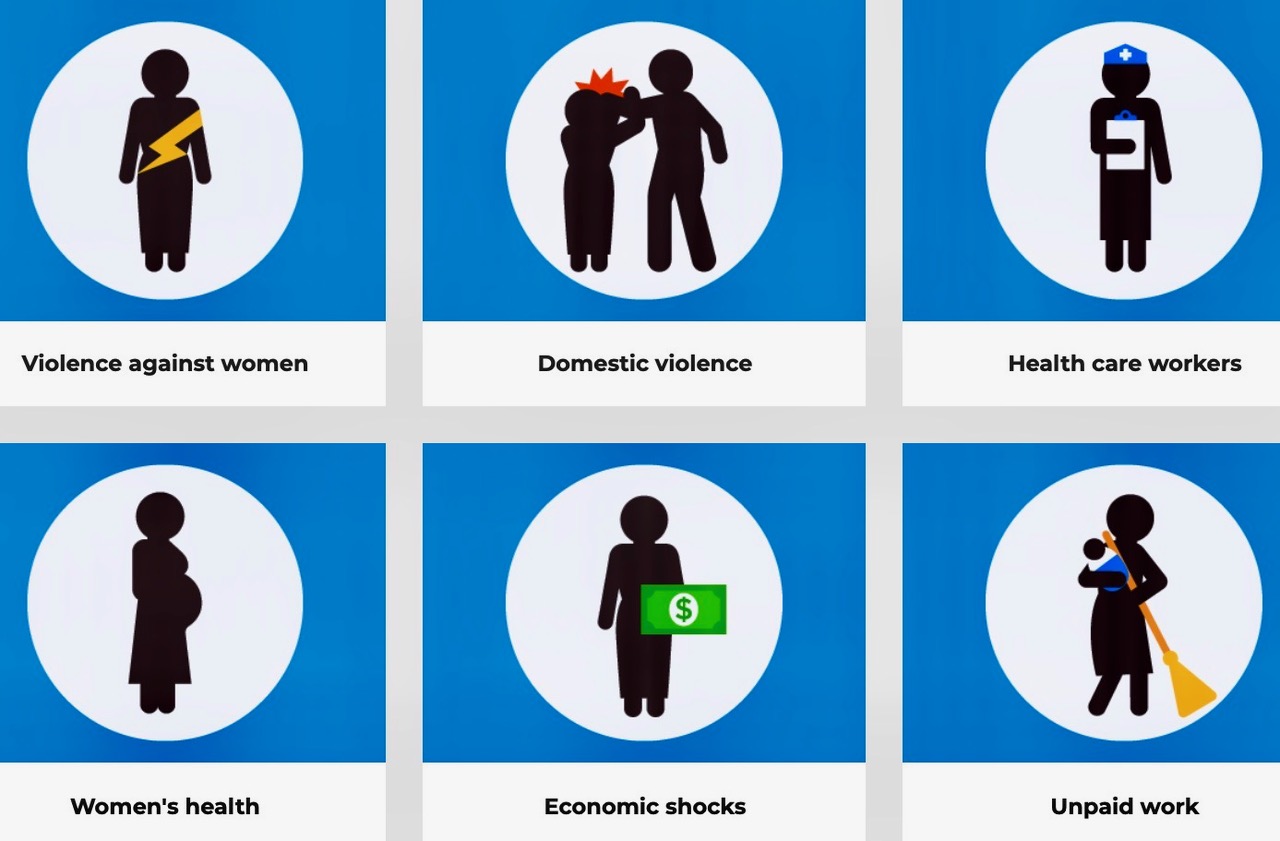 Magazine, Living Well, By Julian Do, Contributor to Immigrant Magazine

Los Angeles — During this global Covid-19 pandemic, women have risen to the occasion to meet many family challenges. In numerous situations, they have become the family backbones, breadwinners, caregivers, and even teachers. At home, these women are grandmas, moms, wives, partners, daughters, and sisters. In the society, they are performing may essential roles as doctors, nurses, teachers, grocers, and deliverers.

But ironically, instead of appreciating them, societies around the world have been taken them for granted. And worse, at times, they get abused and mistreated even by their loved ones. In these trying times, millions have been pushed into the shadow.

“It was only several months ago we were celebrating the fact that women had made up 51% of the workforce in America,” said Dr. C. Nicole Mason, president and CEO of the nonprofit think thank Institute for Women’s Policy Research, who spoke to the media on a May 22 zoom briefing organized by Ethnic Media Services (EMS).

But now, said Dr. Mason, women have disproportionately lost the most jobs as the pandemic has severely impacted sectors like education, leisure, department stores, and hospitality where a huge number of women were employed.

In America, as of May 28, US Department of Labor reports that over 40 million Americans — or about 24% of the workforce — are unemployed.

Around the world, about 1.6 billion people, or nearly half of the global workforce, are “at risk of losing livelihoods”, according to an April 2020 report by the International Labor Organization (ILO) on the labor market impact caused by Covid-19.

Of these numbers, the UN Women’s Covid-19 briefing points out women are the most vulnerable group as they often are employed in part-time and low-paid informal sectors that offer no insurance. In other words, in times of economic crisis, they would be among the first groups to be laid off.

Before the Covid-19 outbreak, a large percentage of women have already taken a dual-role in the family as income earner and caregiver, said Dr. Mason. With school and childcare center closures amid the lockdown, their filial duty suddenly got expanded to include home schooling of their children, she added.

“There are about 1.66 billion students in 177 countries who are now staying home,” said Dr. Beatrice Duncan, who is a policy advisor on Rule of Law at the UN Women agency. “The pressures on women in developing countries are enormous because many parents are not well educated to teach and many households are not equipped with internet for remotely learning.”

And if a woman happens to be a frontline worker like doctor or nurse, it’s truly a tough balancing act to juggle the three family roles, including trying to keep themselves from being infected with Covid-19.

But the grimmest developments to women in the midst of this pandemic are the increase in work inequality and violence against them, often perpetrated by their intimate partners.

Historically, gender inequity has existed for many millenniums. During WWI and the 1917 flu epidemic, women in the US and Europe were recruited into factories to produce arms and ammunition and food production. They were also trained as nurses to staff hospitals and clinics to care for the wounded soldiers and the flu-infected patients.

“But when these crises were over, the government issued bans to bar married women from employment to give jobs to the returned men,” said Dr. Kirsten Swinth, professor of history at Fordham University. Not only they were underpaid for the same work to begin with, many women were suddenly told to return to the domestic housewife role, added Dr. Swinth.

So even though women had made great contributions and proven to be as capable as men during times of crisis, gender inequity persists and has become a silent acceptance.

In general, compared to men, women actually put in more total work hours in a day. However, much of that is unpaid care work (UCW) of domestic house chores and caregiving, which deprive them of economic opportunities and available time for market work (MW), the paid employment.

“During the lockdown, market work is drastically reduced and when all family members are staying home, the unpaid care work is dramatically increased,” said Dr. Estela Rivero, a research associate at Notre Dame’s Pulte Institute for Global Development. “And the burden largely falls on women.”

In her study of gender inequality regarding time demands during the lockdown around the world, Dr. Rivero shows that in Mexico, for example, for families with out-of-school children or sick family members or both, Mexican women generally have to sacrifice 4 hours of paid work and put in extra 6 hours of unpaid care work at home more than men.

And with millions of Covid-19 cases around the world, women’s caregiving work for the survivors could stretch on for years.

Economically, besides work inequity, many women also do not have inheritance rights.

“As a result of the pandemic, about 144,000 women from all over the world have been widowed. It means they are now single parents,” said Dr. Duncan. “Since at least one in five women living in countries where women have no right to inherit, they and their children are totally unprotected.”

Perhaps the greatest danger posed to women and girls during the pandemic is the growing violence against them.

In her April 3 Global Voices article on why many Russian women fear of a lockdown, the Moscow-based independent journalist Anya Shevchenko reports, “Home should be a refuge from the pandemic — but for many women and girls, it means being locked up with a serial abuser.”

Globally, the 2020 UN Women Briefing notes, “243 million women and girls aged 15-49 have been subjected to sexual and/or physical violence perpetrated by an intimate partner in the previous 12 months.” In general, less than 40% of the victims would seek help of any sort and less than 10% would report their cases to the police.

During the Covid-19 lockdown, many women found their situations exacerbated even more. Worldwide, domestic violence has increased by 30% in France, 33% in Singapore, and 25% in Argentina.

In Hubei Province, China, where the city of Wuhan – the origin of Covid-19 — is located, domestic violence has nearly doubled since the lockdown, according to the China-focused media Sixth Tone’s interview with Wan Fei, founder of a nonprofit anti-domestic violence. A Chinese hashtag that translates to #AntiDomesticViolenceDuringEpidemic has gone viral since January.

In one case, Sixth Tone reports that a 12-year-old girl had called for help because her father had physically abused her mother and then kicked them out of the house, along with a 7-year-old sibling, at a time when there was a lockdown to prevent the spread of Covid-19.

Reporting coming out of the Middle East and Africa is also echoing the increasing trends of domestic violence against women and girls around the world.

In Europe, to seek help, Dr. Duncan said, a number of women in Spain and France have gone to their local pharmacies to relay the codeword “mask 19”, a signal that they have been abused at home which enables the police to follow up.

According to the World Economic Forum report published in April 2020, about 3.7 billion people have no internet access, with the majority in developing countries, and the digital divide impacts more women than men.

Since the lockdown, for many women who have no internet at home, they cannot get updated information on Covid-19 to guard their families, perform paid work remotely, or help their children with online learning.

And for those with internet access, women have been experiencing a new kind of abuse which is as damaging as physical harm: cyber violence against women and girls (cyber VAWG). Not only is the internet a reflection of the realities, but many virtual platforms can also amplify many issues ominously, especially online abuse.

The UN has issued a special Cyber Violence Against Women and Girls report in 2020, which indicates that about “73% of women have endured cyber violence” worldwide. In Europe, before reaching 15, about 9 million girls would have been experienced some forms of cyber violence.

In the 2017 Amnesty International’s survey of 4,000 women between the ages of 18 and 55 in Europe and the US, 58% of the participants who had experienced abuse said the harassment “included racism, sexism, homophobia or transphobia.” And that much of the abuse were conducted on major social media platforms such as Facebook, Twitter, WhatsApp, and Instagram.

Women leaders and activists are also often targeted. Laura Bates, founder of the Everyday Sexism Project which documents women’s experiences of gender inequality, told Amnesty International she was getting as many as 200 abusive messages a day, including “detailed, graphic, and explicit descriptions of rape and domestic violence”.

And as children are staying home, they are spending more time on the internet, which make them a target for cyberbullying. Unfortunately, many don’t often share their online-abuse experiences with parents for fear of losing access to technology.

“Some teens would rather be cyberbullied than have their Facebook page or Instagram account shut down,” Kathryn Seigfried-Spellar, associate professor of computer and information technology at Purdue University, says on her university webpage.

Information is the antibody of social problems

Health wise, so far, the pandemic’s largest casualties have been men in terms of infection cases and deaths. But taking on the larger shares of family responsibility and bearing the brunt of domestic violence have largely been women, said Dr. Duncan.

Addressing gender work inequity, domestic violence, and cyber abuse issues during normal times is difficult, let alone during the pandemic. Leaders, scholars, and activists know none of these concerns can be remedied overnight. They, however, believe that by keeping the public informed, understanding and empathy would develop and gradually people would come up with solutions to improve the current situations.