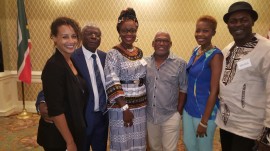 August 9th, 2016, the South African consulate celebrated the commemoration of the historic 1956 Women’s March in Pretoria. A day when over 20,000 women protested the ill treatment of the Apartheid system that stripped black people of their dignity.

Guests were thrilled to honor this fascinating legacy in the company of the host Consul-General, Mrs. Danielle de Bruyn Grady,daughter , daughter of Sophia Williams-De Bruyn the last living leader of this famous march. An event that would forever shift the paradigm and status for women the march was led by Lilian Ngoyi, Helen Joseph, Rahima Moosa and Sophia Williams.