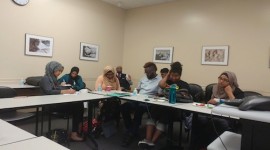 DETROIT — Arabs and African Americans appear to have a common struggle against white supremacy.

But when former State Rep. Rashida Tlaib participated in a protest demanding accountability for the fatal shooting of an unarmed black man by a Dearborn police officer in December 2015, she received disparaging messages from prominent members in the Arab American community.

“Why are you there? Why are you against Chief (Ronald) Haddad? This makes the Arabs look bad. You guys shouldn’t be there. This isn’t your issue,” Tlaib said she was told.