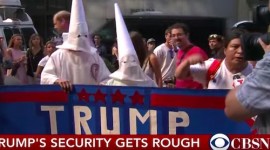 The latest fad in GOP circles is that when a GOP candidate, an elected official, or some GOP connected notable makes a racist crack, dig, slur is to issue a pious, indignant statement denouncing the racist quip or act. The new GOP fad was on ample display when Trump refused to denounce former Klan Kleagle David Duke’s endorsement, nor any other support from the Klan. Yes, he stared down, a supporter wearing a Klan lettered tee shirt at a campaign rally, but that’s somehow not quite the same as a full throated tirade against the Klan. Trump won’t do that. But then again why should he? Fad, and hand wringing knocks against Trump for mute silence on the Klan from the GOP, won’t change the fact that Trump is simply taking his cue from his party.