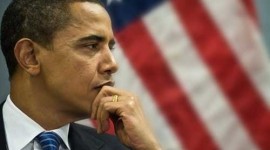 Seven straight years of frothing-at-the-mouth Republicans. Haters pushing derail buttons on your presidency. The irritating reality that a good quarter of the population still believes you weren’t born here.

Now, in the wake of all that, you must give your last official speech before a shark-infested Congress openly hoping for your demise. What would you do?

You’d throw a left hook so hard that it slammed Bamas into the next sequel of Creed.

But you won’t get that from chronically cool President Barack Obama as he delivers his final State of the Union address.