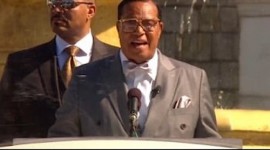 A sea of Black men, women and children covered every bit of open space on the National Mall during the 20th anniversary of the Million Man March, held on Saturday, Oct. 10 here in the District.

But when the man behind the march, the Honorable Minister Louis Farrakhan, stepped to the podium, his message may have come as a surprise to those accustomed to hearing him include controversy in his conversation.