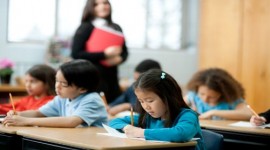 California, which has the largest and most diverse student body in the nation, ranks near the bottom in per-pupil spending and academic performance. A number of recent initiatives promise to begin reversing these trends. This is the first in a series of NAM interviews with those involved in the state’s education reform movement. Ted Lempert is founder and executive director of Children Now, among the most influential advocacy groups for children in California. He spoke with NAM education editor Peter Schurmann.