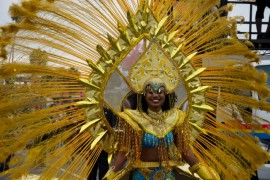 Hollywood CA, the 4th Annual Los Angeles Culture Festival™, celebrated the diversity of cultures and customs living in the USA from various parts of the world. This year’s event saw an outstanding lineup of international and local musical artists, celebrities, and special guests coming together to promote the culture and music of the world on the infamous Hollywood Boulevard.

WASHINGTON, D.C. — Donald Trump continues to make headlines with his anti-immigrant rhetoric, to the ire of conservative leaders.

Trump released his immigration policy plan this week, saying he would build a wall along the entire southern border, deport all undocumented immigrants from the U.S. and end birthright citizenship, among other measures, if he were elected president.