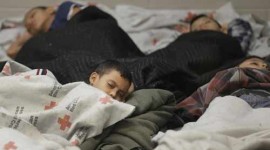 Priests, shopkeepers, doctors, lawyers, activists and even artists are among those who make up a network that is starting to spring up in the United States to help migrant kids – but they must keep the network underground to avoid attacks by anti-immigrant groups.

The exodus of undocumented children from their home countries to the United States, and the recent expressions of hate by anti-immigrant groups, led to the creation two weeks ago of a movement not seen since Central America’s civil wars.