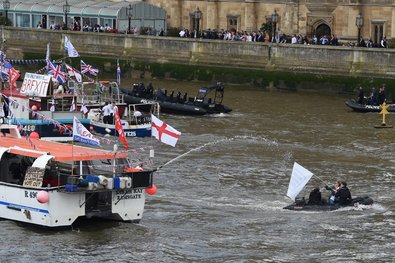 On the Thames last week, supporters of Britain’s departure from the European Union sprayed those who oppose it. Facundo Arrizabalaga/European Pressphoto Agency

In Britain, polls indicate growing support for a vote to leave the European Union — in a so-called Brexit — but the murder of a member of Parliament who was a prominent opponent of the move was a sign for many of how bitter the fight has become. Many economists warn a Brexit would damage the British economy, but supporters argue that the E.U.’s bureaucracy and open borders are harming the country.

What would it mean for Britain to leave the European Union?